On Saturday, 25 March 2007, at 8:30
am we set off with 3 cars packed with people for a 100 km drive to Deua National
Park to see the ‘big hole’ and the ‘marble arch’. The drive took a fair while and on our way we briefly stopped in
Captains Flat because one of us, Cheryl, was required to vote in the
NSW state for that days state elections. We had a good laugh when we set off
again and Cheryl’s car would not start so her passengers had to push the car a
fair bit until the engine came alive again. Not much further on Robert, with
whom I sat in the lead car, suddenly noticed a ‘walking rock’ in the bend of
the road. As he observed correctly, however, it was in fact a turtle larger
than the size of your hand! The others of the group soon joined in to watch it
and some took a couple of pictures of it. It was then safely put back on the
ground away from the road. 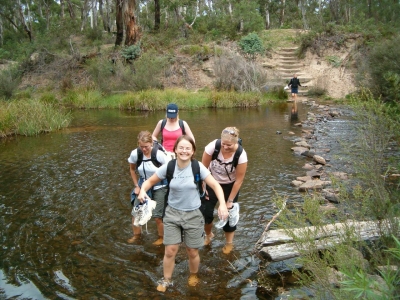 At last we arrived at Deua National
Park and started a promising bushwalk to see some
of nature’s incredible phenomena. It didn’t take long before we hit our first
obstacle, the Shaolhaven
River. Most people
managed to get across without getting wet, despite the rocks being very
slippery. For those with sneakers however, many opted to take their shoes off
and wade through the water.

From thereon it was a lovely and casual walk to the first
feature of the trip, the big hole. On our way we also spotted some wallabies
and some joeys. 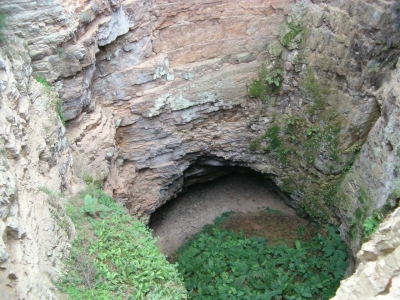 The big hole is a morphological
feature properly known as a sink hole. It is over 100 metres deep. Before its
existence, there must have been a large cave underneath the surface that formed
in a thick limestone layer. The limestone was dissolved and carried away by
underground water probably to the Shaolhaven
River. At some point the
cave ceiling composed of siltstone, sandstone and conglomerate rocks must have
collapsed creating the big hole. These sedimentary rocks are about 350 Million
years old, deposited during the Devonian geological era in a coastal
environment. 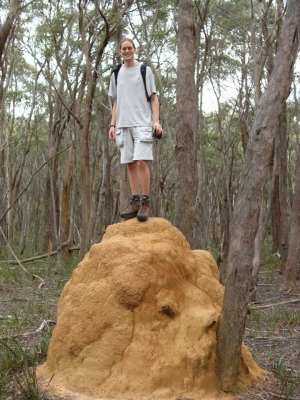 We had a short break and then moved on to see the next
highlight of the trip, the Marble Arch. As we walked through the eucalypt
forest massive mounts of dirt were spotted between the trees. These are
presumably abandoned termite mounts. Since we didn’t see the termites
themselves it still leaves me wondering where they went. I had a picture taken
of me on top one of these big mounts. 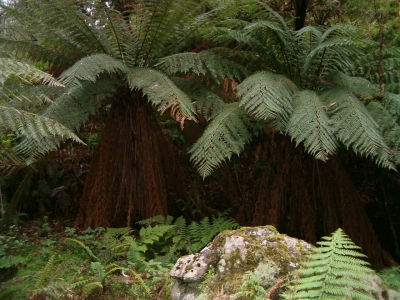 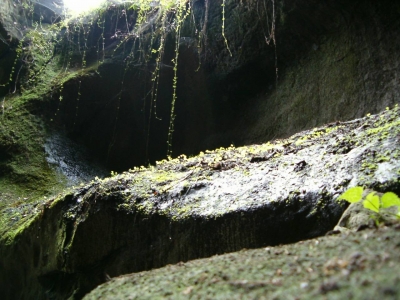 We finally arrived at the Marble
Arch, which is a limestone cavern followed by a river gorge. We took out our
torches and headed into the cave. The name Marble arch is rather misleading because there is
no marble to be found, just limestone and limestone breccias. 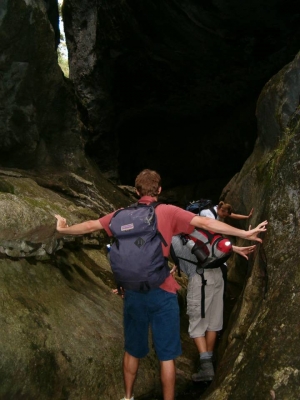 The experience was awesome as we made our way through the
cave and the narrow gorge with cleanly polished rocks caused by the action of
the water over a long time. The rocks were extremely slippery too and it didn’t
take long before some of us lost balance and slit into the shallow pools of
water in the gorge. Although getting wet didn’t hurt, the main scare turned out
to be the leeches in the gorge. I managed to get a remarkable shot of one of
the bigger ones. We had lunch in the gorge where we couldn’t go any further
because of a small lake blocking our way. For some great group pictures with us
all having lunch, see the ANUMC website. That is, if they have been uploaded
already. After lunch we made our way back to the cars along the same path we came
and headed back to the SRA and got back by around 5:30 pm. 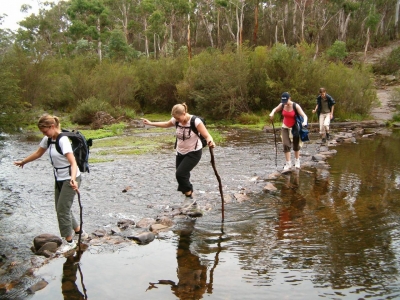 All in all, this trip was awesome!!
And I think everyone fully enjoyed themselves as well. Apart from a few wet
feet, nobody took the plunge or got hurt.

I have uploaded the rest of the photos in high res here for your viewing pleasure.