What are crystal defects?

Time to put more science on this blog, specifically related to my research. 🙂

Part of my research is about looking at crystal defects, more specifically line defects called dislocations. These phenomena are missing half planes of atoms in a crystal structure.

In an ideal world there is a certain spacial configuration of specific atoms (like carbon in diamond) that is energetically the most stable with minimal entropy (or chaos). This was assumed to be all the way up to the early 1930s until certain individuals, such as Egon Orowan started looking at crystal plasticity, the ability for a material to deform without breaking. Deformation experiments were carried out on metals and alloys to assess their strength and breaking point. Oddly, the calculations did not match the experimental results. It turned out that materials were a lot weaker, by several orders of magnitude, than was presumed. Around 1932 Orowan and Taylor simultaneously proposed the existence of missing atoms in the crystal structure to explain the observed weakness in materials. And thus was born the theory of dislocation glide to accomodate plastic deformation. Below you can see two dislocations in an otherwise perfect atomic lattice. These are the so called end-members. Normally dislocations form a mix between the two.

Not much later on, with the invention of the electron microscope, dislocations were proven to be real and have been observed in any material conveivable including upper mantle rocks which is what I am interested in.

(Don’t be fooled to think that there is a huge magma ocean deep in the Earth just because volcanoes spew out molten rocks. Volcanoes only exist in very specific settings, mostly at plate margins. The presence of subducted water at those locations greatly enhances the melting point of rocks.)

Olivine (Fe,Mg)2SiO4 otherwise known as peridot. This specimen comes from a mine in Pakistan and is about 2 cm long.

So in order to understand how the Earth works, i.e. mountain building, formation and destruction of oceanic crust, earth quakes and stress states in the Earth’s lithosphere we need to know about the strength of the rocks in the Earth. Knowing that dislocations in materials greatly reduce its strength means that they can essentially not be ignored and have to be studied.

This is where I come in. 🙂 Not only is it the above that interests me, but also the applications. For years now have geophysicists imaged the inside of the Earth by recording sound waves (seismic waves) as they are reflected and refracted in the Earth and returned to the geophones connected to a seismometer. The seismic waves can come from either Earthquakes or explosions.

The Earth is highly anisotropic in nature, therefore the understanding of a material’s behaviour to the propagation of seismic waves needs to be carried out in the lab. My study attemps to systematically prove or disprove that deformed rocks in the Earth, containing these dislocations, can slow down and attenuate (dampen) these seismic waves.

Other factors that play a role are partial melts in rocks, grain size, water and of course temperature. That makes this study not easy!! 😀

Below is shown an electron microscope image of decorated dislocations (by oxidation) in a synthetic (home made) deformed olivine aggregate. 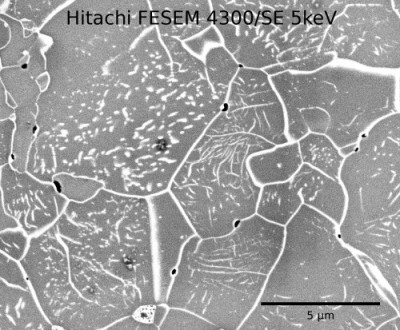 So there you have it. If anything is unclear, please leave a comment. I’d only be too happy to clarify. 🙂


2 Replies to “What are crystal defects?”